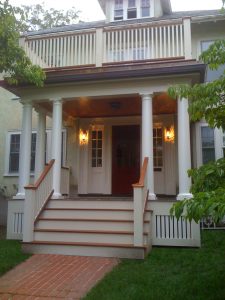 Diane received her bachelor’s in architecture as Valedictorian of her class at Virginia Tech’s College of Architecture and Urban Studies in 1997 and her masters in education at Harvard University Graduate School of Education in 2011 where she focused her graduate studies on the ecology of learning. She is a licensed architect in five states, NCARB certified, and is a LEED (Leadership in Energy and Environmental Design) Accredited Professional. Prior to founding Miller Design LLC in 2002…

…Diane worked at two Boston-area architecture firms and as a Project Designer for the in-house design team for Bright Horizons Family Solutions. Her portfolio consists of a variety of work ranging from large scale commercial, institutional and master planning projects to the more intimate scale of community centers, children’s environments and residential design.

Diane has assumed a leadership role within the community and profession. In Belmont, she is an elected Town Meeting Member, appointed member of the Belmont High School Building Committee, and Secretary of the BHSBC communications subcommittee. She has served as a member of the Board of Directors for Green Schools, a non-profit organization dedicated to providing healthy learning environments for children, and co-chaired the Friends of Joey’s Park committee that designed, raised funds and implemented a large community-built playground for which she received the Chamber of Commerce Service to Youth Award. She has served as a Big Sister for over 6 years, organized and facilitated an Arts Program for at-risk teens in DSS custody, volunteered at a local homeless shelter for women and children, taught architecture to inner city fifth graders through the Citizens School volunteer organization and serves as a Master Teacher for Learning By Design Massachusetts. For seven years, she volunteered as chair of the Young Architects Committee at the Boston Society of Architects. She has also served as a guest critic and speaker for numerous architecture conferences, conventions and events, received research grants from the Boston Foundation for Architecture and the Boston Architectural Center and helped organize the Child Care Design Institute at Harvard University’s Graduate School of Design.

Since 2000, Keith has focused specifically on the design of children’s learning environments and has established himself as an expert within that highly specialized market sector. He has designed and served as a consultant on over 100 distinctive childcare projects including large ground-up corporate-sponsored community centers, interior renovations and tenant fit-outs, back-up childcare centers, creative movement centers and playgrounds. Projects have ranged in size from 2,000  sf church fit-outs serving a few dozen children to large…

…state-of-the-art facilities accommodating several hundred children. In his previous role as an in-house designer and project manager for Bright Horizons Family Solutions, Keith developed national standards for child care and playground design and managed numerous projects throughout the United States and Europe. In addition to his design expertise, Keith also has extensive Construction Project Management experience. He has collaborated with a wide range of developers, architectural firms, operations teams and licensing entities. He offers extensive experience regarding educational codes and regulations, design and detailing, and the integration of educational program goals.

Keith is a Certified Playground Safety Inspector. He received his BArch from Virginia Tech’s College of Architecture and Urban Studies in 1996 and helped organize the Harvard University Childcare Design Institute from 2002-2006. Prior to specializing in the design of learning environments, he worked at two award-winning Boston-area architecture firms where he focused more on large scale master planning, commercial and retail projects.